According to Buzzfeed, parents of young women are telling police that R&B singer Robert R. Kelly, 50, is holding their daughter against their will and is running an abusive “cult”.

A mother who is mentioned just as “J” was excited when R. Kelly showed interest in her 19-year-old daughter. They met R. Kelly in 2015 backstage after a performance and spent hours talking to the singer. With the help of his status and contacts J wanted to see her daughter’s music career take off.

“When we got to go backstage with R. Kelly, we stayed there over two hours,” said J. “One-on-one with just me and my daughter and him. We went back to talk about the music. He listened to her CD. He was going to help her with her CD, and I was really impressed with him at first, because I have always been an R. Kelly fan.”

“In the back of our minds, we were thinking [my daughter] could be around him if I was with her,” J. said. “It didn’t really hit home. Even with the Aaliyah situation, now that I think about it, ‘Age Ain’t Nothing But a Number’ … but you don’t think about that. You grew up with the song, and you like the song.”

To refresh your memory R. Kelly married the late singer Aaliyah when she was 15-years-old with a falsified marriage certificate that claimed 15-year-old Aaliyah was 18. Kelly was 27. The marriage was eventually annulled and the pair signed paperwork to never speak of the relationship.

R. Kelly’s dealings with underage girls doesn’t end there. According to Wikipedia: 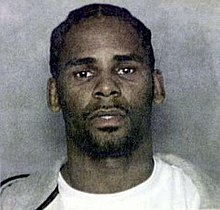 On February 3, 2002, a video surfaced allegedly showing Kelly engaging in sex with, and urinating on, an underage girl. The story, which was released by an unknown source, was sent to the Chicago Sun-Times, the newspaper that broke the story on February 8, 2002.[139] This news surfaced as Kelly was to perform at the opening ceremony of the 2002 Winter Olympics. In interviews with WMAQ television of Chicago and MTV News, Kelly said that he was not the man in the video.[140][141] In June 2002, Kelly was indicted in Chicago on 21 counts of child pornography.[142] That same month, Kelly was apprehended by Miami Police Department on a Chicago arrest warrant, and Polk County Sheriff’s Office conducted a search of Kelly’s residence in Davenport, Florida. During the search, officers recovered 12 images of an alleged underage girl on a digital camera – wrapped in a towel in a duffel bag – which allegedly depicted Kelly “involved in sexual conduct with the female minor.”[143] According to the Chicago Sun-Times, the girl in the images obtained from Kelly’s Florida home also appears in the videotape which got Kelly indicted in Chicago.[144] Kelly was arrested in January 2003 on those charges. In March 2004, these charges were dropped due to a lack of probable cause for the search warrants.[145]

Their daughter responded by posting her own video wherein she denies being held against her will:

Not speaking to your parents for 6 months and refusing to say where she is located are clear signs that something isn’t right about this relationship. Unfortunately, for her family, the age of consent is 17 in Illinois and 16 in Georgia so there is no legal recourse to forcibly bring J’s daughter home.

Cheryl Mack, Kitti Jones, and Asante McGee are former members of R. Kelly’s “inner circle”. They were able to share intimate details about how Kelly keeps the women. They said multiple women live in properties rented by Kelly in Chicago and Atlanta. He controlled almost every aspects of their daily lives. From meals, when they sleep, how they dress, and how they also engage in sexual acts that he is said to tape. Not only does he tape the sexual encounters he shares the tapes with close male friends.

Cheryl Mack, worked as Kelly’s personal assistant for a year and a half.

Kitti Jones and Asante  McGee both said they lived with Kelly and had sexual relationships with him. The women were able to give a run down on who lives in his homes:

R. Kelly refers to them as his “babies” and he is to  be called “daddy”. If any of his rules are broken the women are subjected to physically and verbal abuse. Kitti recalls being slapped by R. Kelly outside a Subway shop because he thought she was too friendly with the cashier.

“R. Kelly is the sweetest person you will ever want to meet,” McGee said. “But Robert is the devil.”

Even though R. Kelly is well know as a sexual predator he has never been convicted. in 2008 he was acquitted on all 14 charges of making child pornography. Since then there have been many women who have stepped forward to claim R. Kelly has had sexual relationships with them when they too were minors. These cases are usually settled out of court and upon reaching an agreement the women sign a non disclosure agreement.

Despite what we all know about R. Kelley’s past and present, he continues to sell-out shows, and earn an income as a musician. We can only hope that these recent revelations will serve as a warning sign to other women who would seek to look to Kelley as a mentor.

I’m 30 something reside in Massachusetts and enjoy pop culture.

« Brooklyn’s CurlFest: a Celebration of Natural Hair and The Magic of Melanin [Pics Inside]
Kevin Hart Supposedly Caught Creeping On His Pregnant Wife »

Signup for news and special offers!

Stay Up To Date